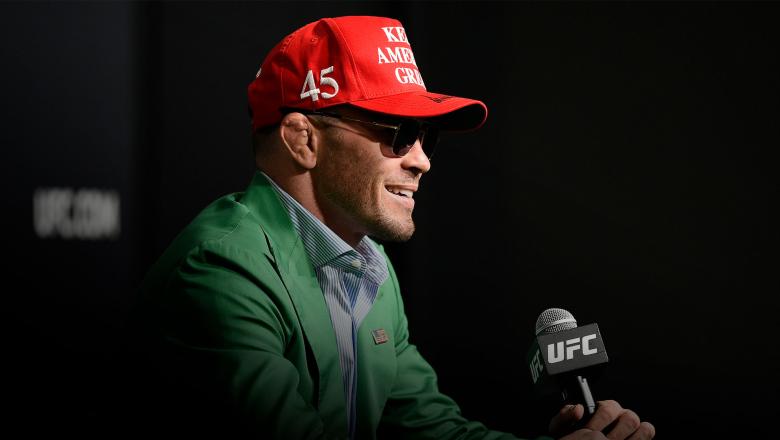 “I think the storyline, the angle now, is so much more intriguing to the eye,” he said. “A lot of people expect me to fall off and have a drop in my game. ‘Oh, he left this big gym and he’s not gonna be as good as he was,’ but they don’t realize that it’s gonna be the other way around. Now you’re gonna see massive improvements in my game, now you’re gonna see a hungry Colby Covington who’s ready to come back and show the world that I’m better now. I have better coaches around me, I have coaches that are truly in it for me. They’re not in it just for the paycheck, they’re truly in it because they want to see Colby Covington 2.0. I think that storyline is so much sweeter now. And it’s gonna show on September 19th.”

If the Woodley that showed up in losses against Usman and Gilbert Burns shows up again, Covington may just be right. But if the “old” Woodley is back, letting his hands go and fighting the way he did when he ruled the 170-pound weight class, another Fight of the Year candidate could be on the cards. What does Covington expect?

“I definitely expect him to be the best Tyron Woodley we’ve ever seen, the guy that was the champion of the division that claimed to be the best welterweight of all-time,” he said. “I feel like he’s gonna come in hungry for this fight. His last two fights, yeah, he got beat by decision, but no one’s finished him and if I go out there and finish him, that puts an exclamation point on my fight and shows that I’m ready to get my belt back. This fight brings out a lot of animosity and a lot of hatred and a lot of motivation to go out there and prove all the doubters wrong, so I expect to see the best Tyron Woodley.”

The best Woodley versus the best Covington will be epic, and the winner will certainly have a case for a title shot after Burns and Usman meet. Covington, not surprisingly, doesn’t want to wait for another crack at the champion, and I’ve got another question for him. And it’s not a trick one. Simply put, if he gets that undisputed belt, does it matter who he takes it from, or does it have to be Kamaru Usman?

“A hundred and ten percent, it needs to be from Usman,” said Covington. “If anybody beats him before I beat him, then I’m not gonna be able to live with myself. I watched that last fight a hundred times and a hundred times I’ve seen that I’m clearly the better fighter. I was clearly winning four out of the five rounds up until the bad stoppage (Ed. Note – Usman and Covington were up 3-1 on one card apiece, while the third judge had it 2-2 going into the fifth round), where I was still completely in the fight. For someone to beat him before I beat him would be so bittersweet; it wouldn’t feel right if I came and won the title from someone other than him. So I’m looking to jump the line September 19th, finish Woodley and get my rematch with Usman because the fans want to see that. This is a war. That was one battle, but what about round two, a sequel and then a trilogy? I’m coming for Usman.”